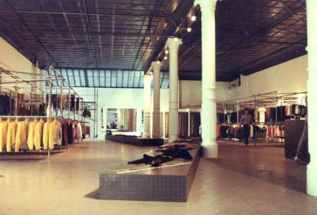 In a recent interview with me on the floor of the NYSE, Cheddar TV founder and host of the network’s daily business news broadcast, Jon Steinberg insisted that SoHo’s current high store vacancy rate indicated the neighborhood was a “nightmare” because it had become inundated with shoppers from New Jersey.

In fact, SoHo’s retail vacancy, which doubled in the last 18 months to 20%, is a result of rising real estate values and skyrocketing rents driven by the neighborhood’s desirability as a shopping destination for brands like Moncler, Louis Vuitton, Dior and Chanel, appealing to the higher-income global tourist drawn to New York in record numbers since 2008.  For many other retailers, however, looking chiefly to drive on-site store sales, the rents are too high to sustain profitability.

While the stretch of Broadway between Houston and Grand Streets may have some similarity to a mid-level New Jersey shopping center in terms of the range of brands featured (from Uniglo to Zara to American Eagle), the reality is that SoHo is perceived globally as one of the most desirable 7-day neighborhoods in the U.S. SoHo’s strength reflects a mix of fashion and tech firm offices and showrooms, luxury loft apartments as well as leading “high-street” brands on streets like Prince, Spring and Greene and trendy restaurants like Cipriani, Ladurée, and Felix.

More importantly, as e-commerce and particularly the technological obsessions of millennials (and centennials) transform shopping, leading global brands are looking to vital neighborhoods like SoHo as environments ideal for engaging consumers in new types of retail experiences. I’ve just represented Sennheiser, the leading German headphone and microphone manufacturer, in licensing a five month “pop-up” SoHo store to launch the brand’s U.S. retail presence. The primary intent of this store is to engage consumers with exciting displays, events, and concerts to generate brand awareness and stimulate multi-channel sales. The future Sennheiser space is now occupied by the premium Belgian ice cream brand Magnum (now owned by Unilever) which has been phenomenally successful in launching in the U.S. in SoHo — typically with customers lining up around the block — curated by a strong social media presence.

The willingness of landlords in SoHo to entertain “pop-up” leases reflects recognition that today’s higher vacancy requires greater flexibility in rents as well as retail concept.

ducated at Yale and Princeton and an innovative thinker and leader in New York's commercial real estate community, Alex Cohen develops strategy, advises, manages and analyzes commercial office, retail and mixed-used acquisition and lease transactions for tenants, landlords and investors. With a background in urban planning, Alex has over 18 years of commercial real estate transaction negotiation, totaling ten million square feet. Alex has both extensive experience in launching international brands in the U.S. and a deep expertise in the marketing and repositioning of mixed use real estate. Alex’s unique perspective allows him to identify markets, brand buildings and plan space configurations with the potential to attract and retain talent and customers vital to the workplace and retail environments of the future. Alex is a recognized thought leader and frequent contributor and speaker in national and business media, including US News & World Report, USA Today, Huffington Post, Epoch Times and Crain's NY Business and he was recently interviewed on the floor of the NYSE by CheddarTV. His recent speaking engagements have included Columbia Business Schools' annual Retail and Luxury Goods Conference Luxury Interactive 2017. His recent clients include Sennheiser, Unilever, Kering (Gucci), Canada Goose and CBS. Alex resides in Midtown Manhattan, one block from Central Park, and often spends his weekends in the Hamptons with his family and Golden Retriever, Lapo. View all posts by Alex Cohen